Venture Man
I've been a full-time author for over ten years, and written Blood Crazy, Darkness Demands, Vampyrrhic, The Night of the Triffids. My next novel from Severn House will be THE MIDNIGHT MAN that features Van Gogh in 1888, the most turbulent year of his life in Arles.

It's been a busy old bunch of months and as well as some video projects I've also continued writing my novels. The latest ones are THE MIDNIGHT MAN, featured in this blog, and VENGEANCE CHILD, a story of a child haunted by the ghosts of mass-murder victims. Next up will be GHOST MONSTER. Then just before Christmas sees the appearance of WHITBY VAMPYRRHIC. This is a return to the Vampyrrhic mythos, Viking legend, and vampires of course. But vampires with a difference.

Clive Barker has sanctioned and provided a cover for a new anthology called HELLBOUND HEARTS (edited by Paul Kane and Marie O'Regan). I'm thrilled to have a story in there. It's called OUR LORD OF QUARTERS and is set in Byzantium, some six hundred years ago. The book is out in September 09.

Simon Clark
Posted by Venture Man at 02:26 No comments:

Vincent Van Gogh lived in London for a while in his youth. His experiences there in that turbulent, and sometimes mysterious city, one that Van Gogh likened to a ravenous beast, became the inspiration for THE MIDNIGHT MAN, published by Severn House. It's a story of murder, madness and ghosts. Blending fact and fiction, it imagines the dramatic events that engulfed the artist in 1888.

Here is the link to THE MIDNIGHT MAN video that features the extraordinary maze of streets that Van Gogh would have known - and which would become the haunt of Jack the Ripper.
Posted by Venture Man at 02:32 No comments: 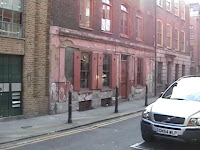 This follows on from the post below this one. The link to the video isn't working, but if you visit YouTube and enter 'The Midnight Man wmv'in the search engine it should take you right there. Maybe the ghost is already in the machine...
By the way, the photo is of a Whitechapel street - a place Van Gogh would have known in his youth.

To mark the imminent release of THE MIDNIGHT MAN in paperback I've made a short film that looks at the London streets that were familiar to Van Gogh in his youth. I talk a little about the writing of the book and there is a short reading. To view the film hit the link:

Writing the novel was a labour of love, and I'd like to take this opportunity to thank all those who've written to tell me how much they enjoy the book, including some who have told me this is their favourite Simon Clark novel of all. Cheers and thanks again.

Hey, just a quick look what I found item. For a guitar instrumental version of McClean's Starry, Starry Night cut and paste following into your browser bar. Chet Atkin's version of the song is both haunting and mellifluous


http://www.youtube.com/watch?v=wsePsTEgiqU&feature=email
I was watching an interview with one of my favorite musicians, Bill Nelson, when he mentioned that Atkins was one of his inspirations. Once your appetite's been whetted the temptation is to go over to YouTube and find a clip.

Coming soon on the blog: another 'murder your darlings' entry where I'll reveal a scene from The Midnight Man that didn't make it to the final edit.

Until next time, take care.
Posted by Venture Man at 06:40 No comments:

ALL ABOARD THE FIREBALL EXPRESS!

This is a hugely belated entry. A looming deadline for a new novel meant I had to devote every working (and waking) moment to completing it. Now that's done I can catch up on e-mailing, gardening, car-washing, blogging - you name it.

A few weeks ago I needed to take a trip from my home here in Yorkshire to London. Usually it's a straightforward ninety minutes or so by train. Only this time the huge express train was just half an hour from London when suddenly it went from thundering through the countryside at 120 mph to stopping, juddering, brakes screaming in the middle of fields, miles from the nearest town.

Then stuff happened. I noticed passengers were looking out of the window asking things like 'Why is the train driver running along the track?' 'Why do the conductors look so worried?' 'Why has one jumped off the train with a fire extinguisher in his hands?' Then the train driver returned to his cab to announce over the PA, 'There's going to be a delay, I'm afraid, because the rear motor unit has caught fire. Staff are evacuating the end carriage.' Foul black smoke rolled up into the sky. 'We're off-duty firefighters,' said two men in the seat in front of mine. They collected more fire extinguishers from the carriage and went to battle the flames. Not that I saw any from my carriage. Black smoke, however, was still rolling spectacularly across the meadows.
Instead of pandemonium the passengers sighed stoically, pulled out their phones and: 'Jeff, inform the boss I'll be late.' And from others: 'Can you tell the people in my office the meeting will be this afternoon?'And a woeful: 'I'll be late for the wedding, Laura. No, I'm not calling the wedding off. The train's on fire. No, it's not just an excuse. I love you. I really do love you...' And so on.
It's what the British call 'the Dunkirk spirit.' Plenty of jokes, and quiet gumbling, but we'll get there in the end. After an hour there were cheers when we were told over the PA that the firefighters were almost here. Ten minutes after that there were groans when we were told the fire engines had got bogged down in soft mud. Then more cheers moments later when, from our carriage, we saw a dozen firefighters in full kit, helmets and respirators gamely jogging through meadows, climbing fences, leaping over streams to reach us and put out the flames. Once the fire was out the remaining engine doggedly got the train to London. Where I was spectacularly late for my meeting.

But later in the day I managed to drop in at the National Gallery and see the Van Gogh paintings they have there. The most famous is Sunflowers. To see an original is nothing less than awe-inspiring. It blazes from the frame like the summer sun. However, my favorite is the little-known Long Grass With Butterflies. It's a deceptively simple composition of grass, the bottoms of tree trunks, insects. It's almost like looking through a window into a field. But there's a sense you're are looking back through time; you could almost step through the frame into the summer meadow of more than a century ago. A glimpse of path looks as if it wants to lead you to a mysterious destination.

<
After that I had to rush to catch my train. As I neared the Tube station that would take me back to Kings Cross Station I first noticed lots of broken glass in the road, then the sounds of hundreds shouting. An anxious guy in spectacles called out to me, 'Whatever you do, don't go any further down that road. Football fans are rioting. It's carnage.' Fiery locomotives, raging riots. Thankfully, I knew another route. Half an hour later I was on my train homeward bound. My only problem now was deciding what kind of cake to have with my coffee. 'I'll have chocolate cake, please?' The steward flinched as if I'd uttered something dreadful. 'Ah, sir, we've had a problem with the chocolate cake. Can I let you into a little secret?'

Let me tell you, it was lovely to get home...

Take care, whether traveling or taking it easy at home.

Simon
Posted by Venture Man at 08:20 No comments: